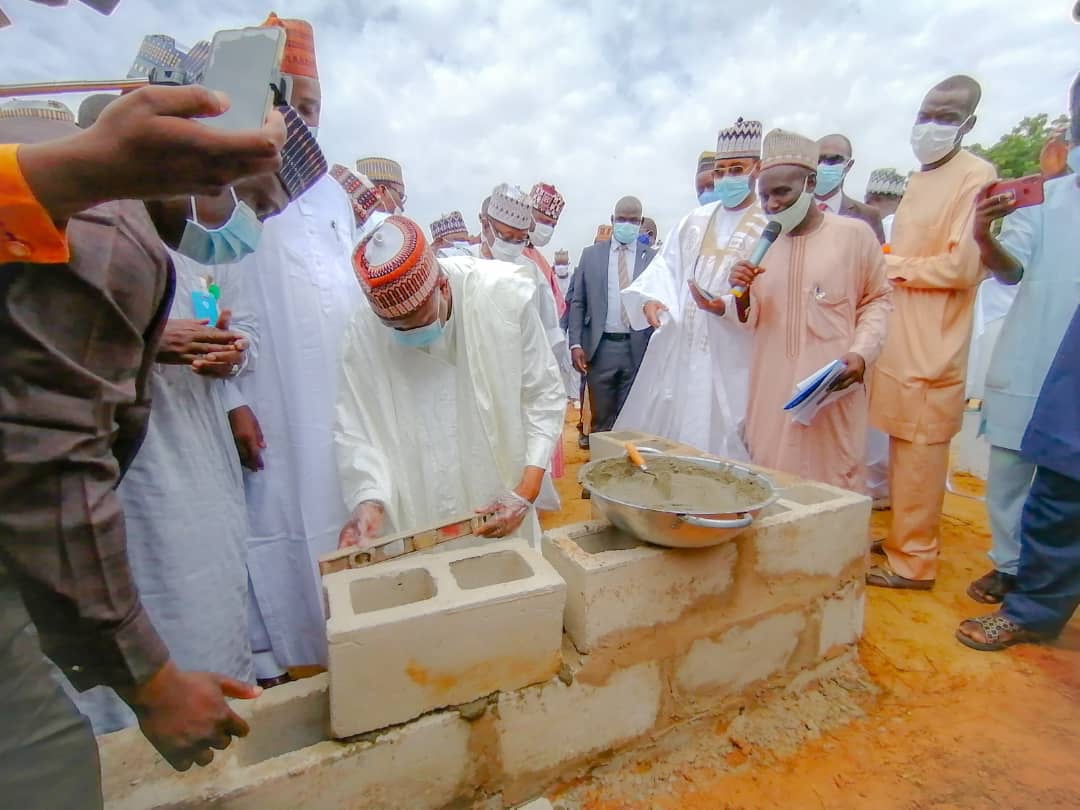 Kebbi State recorded on Monday another feat, as Governor Abubakar Atiku Bagudu performed the ground breaking ceremony for the construction of a whopping sum of about 1.2 Million US Dollars FIFA Mini Stadium, in Birnin Kebbi, the State Capital.

An elated Senator Abubakar Atiku Bagudu, while expressing delight with the commencement of the all-important project, also vowed it will be properly executed to its logical completion.

Bagudu exclaimed ” Today is an important day for us in Kebbi State. A day for the flag off of this great project of the World Football Governing Body,FIFA.

” This is a new initiative by the FIFA President, Gianni Infantino . We must acknowledge all and sundry who have worked so hard and tirelessly, to ensure the realization of the project.

Bagudu stated that, sports was an important tool of development, adding that, every society must accord it the desired attention, otherwise it is doomed.

The Kebbi Governor further said that, youths with talents in the state were being fished out, for mentoring, to enable them to take their rightful places , locally, nationally and internationally.

According to the governor, the premier project will provide more opportunities for these youths, among many other short and long terms advantages of the project.

He appreciated FIFA for collaborating with NFF on the project from inception to the final go-ahead with all due diligence in line with best practices.

The NFF boss averred ‘ This idea is in line with NFF’s and FIFA’s new thinking of grassroots football development and youth empowerment, as well as battling social vices.

He commended governor Bagudu for his robust support to the project including approval of the massive land on which the stadium will be built. He equally acknowledged Alhaji Abubakar Chika Ladan , the Chairman of Kebbi State FA for his untiring efforts that has also greatly contributed to the success of the project.

He charged the contractor not only to ensure completion of the project within the stipulated six (6) months agreed with FIFA, but also to do an excellent job that the people of Kebbi State and Nigeria will be proud of.

On his part, the NFF Secretary General, Dr Mohammed Sanusi, said the project was the brainchild of FIFA President, Gianni Infantino, who made some pledges while campaigning for reelection.

Sanusi said that, Infantino promised to develop football from the grassroots, as well as improve funding, for football globally.

The NFF Scribe who was emotional, also said that, Infantino has promised to improve funding to the development of infrastructure and facilities in all Member Associations.

” Instructively, he has trippled funding for infrastructural development, hence, the conception of this project.

” NFF allowed these funds to accumulate to $4million , as such, this project is now a reality,” he explained.

Sanusi also extolled the invaluable support of Bagudu to his reappointment and other endeavours.

The NFF Chairman in Kebbi State, Alhaji Abubakar Chika Ladan, disclosed that, the project was the first of its kind in Nigeria, adding that, a similar project which was approved for Nigeria,is expected to commence in due course .

Ladan lauded Bagudu for his unrelenting efforts and commitment to turn around the fortunes of sports in the state .

The NFF Chairman further said that, the project cannot come at a better time than now,just as he acknowledged that, sports has never had it so good, in the history of the state, than under the administration of Bagudu.

Ladan also noted with happiness that, Kebbi State was now leading in Nigeria ,in beach soccer, recalling that, the state’s Club, Kebbi Fishers, was the only African Team that participated in a competition, in Turkey, in 2019.

According to him, Kebbi Fishers, was now number one in Africa, while it places number 59 in the world , all courtesy of the moral and financial support of Bagudu.

Features of the ground breaking foundation laying ceremony for the NFF/FIFA Forward Goal Project for the construction of the stadium include the formal hand over of the site by NFF to the contractor, unveiling of the plaque and foundation laying by governor Abubakar Atiku Bagudu.