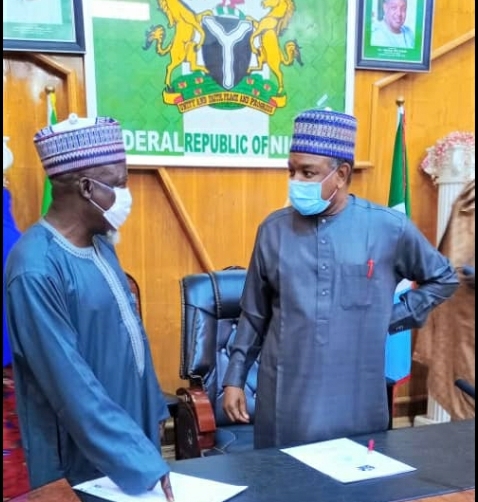 The Governor spoke on Monday, when Bunu paid him a courtesy call at Government House in Birnin Kebbi .

Bagudu said: ” We must commend the president for choosing one of able, brave and courageous sons into such an enviable position.

” He was appointed to replace the late Bello Alkali ,who was also diligent and indefatigable.

” We are confident that, he will live above board and ably represent the entire people of Kebbi State.”

The Kebbi governor further described the commission as one those Agencies that were accorded pride of place by the Nigerian constitution.

He added,” It however requires people of personality, courage and vision for the society to benefit from it.”

According to Bagudu,with the new appointment, more opportunities will open up for the people of state .

This, he further noted , was by the virture of quality representation and competence .

The governor , while congratulating Bunu , assured him of total support, for him to succeed in the national assignment.

Bunu, acknowledged the sustained invaluable support to him and the commission by the governor.

He thanked the governor for the vital role he played in the success of his appointment and promised to do his best as the representative of the state.

He promised not to disappoint the people of the state in the discharge of the national assignment.

Bunu solicited for the assistance of the Kebbi State Government to overcome some of the challenges facing the state office of the commission in Birnin Kebbi.