Save Kebbi from national embarrassment – KCC to Attorney General Malami

Kebbi Concerned Citizens, KCC, a registered organization of concerned citizens from Kebbi State has called on the ATTORNEY GENERAL of the Federation, ABUBAKAR MALAMI SAN, “TO CLEAR SELF FROM ALLEGATIONS AND SAVE KEBBI FROM NATIONAL EMBARRASSMENT”

Thi is coming few days after MALAMI denied reports issued by Sahara Reporters on purchase of houses for son and allegations that the AGF has granted approval to a firm (Omoh Jay Nig Ltd) purportedly standing trial in court for stealing crude oil, diesel to auction goods seized from it

The statement issued by KCC today through their official Social media account reads:

“KCC watched with keen interest following Media face off and series of allegations of corruption, misconducts and abuse of office by online media outfit SAHARA REPORTS and revelations coming from the Presidential Panel proving Ibrahim Magu Ag Chairman of EFCC.”

“The allegations raised are too heavy to ignore considering the position Malami is occupying as the Chief Law officer of the federation and as a representative of kebbi state in the Federal Executive Council.”

“Therefore, KCC wish to use this opportunity to call on the HAGF to clear himself from the allegations within 7 days to save his name, image and integrity as well as the reputation of the state or risk call for the President and the National Assembly to set up panel of investigation of the matter.” KCC concluded. 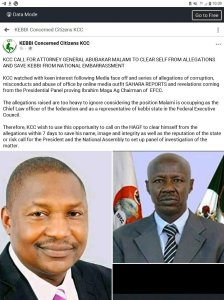 SAVE KEBBI FROM NATIONAL EMBARRASSMENT – KCC TO ATTORNEY GENERAL MALAMI

AGF Abubakar MALAMI had on July 11th published a rebbuttal to an allegation by Sahara Reporters thro Dr. Umar Jibrilu Gwandu (Special Assistant on Media and Public Relations Office of the Attorney-General of the Federation and Minister of Justice) denying that he purchased any house his my son in Abuja

“The wedding fatiha of the eldest son of the Honourable Attorney-General of the Federation and Minister of Justice, Abdulazeez Abubakar Malami took place under strict observance of the protocols and guidelines of the Presidential Taskforce on COVID-19.

Honourable Attorney-Genral of the Federation and Minister of Justice, Abubakar Malami,SAN thanked friends, well-wishers and the general public for their prayers, goodwill for the wedding fatiha which took place Saturday, 11th July, 2020 in Kano.

Malami expressed appreciation for the understanding demonstrated due to COVID-19 pandamic the wedding fatiha was low-keyed.

Earlier the Minister has communicated in writing notifying friends and colleagues that due to current situation of COVID-19 he only solicited for their prayers and goodwill.

It is important to note that the wedding fatiha took place in Kano on Saturday 11th July, 2020 in the morning. Any other activity before or after the wedding fatiha is not connected with the marriage and we therefore disassociate ourselves from it in its entirety.

The attention of the Honourable Attorney-General of the Federation and Minister of Justice, Abubakar Malami, SAN has been drawn to a mischievous, deceitful and perfidious publication by the notorious factory of fake news in Nigeria, the Sahara Reporters with an intent to spread lies.

It is regrettable that the information communication technology tools have been hijacked by disgruntled elements in spreading fake news and blatant lies.

The report by the media is a clear violation of ethical journalism practices on verification of facts and authentication of claims. It evinces lack of professionalism and exposes rash and reckless presentation of figment of imaginations shrouded with bigotry and bundled with sentiments of unscrupulous questions.

For instance, who is the vendor of the purported house bought for the son of the Minister in Abuja at N300m? Where is the so-called mansion located in Abuja? Where are the title documents?

While refuting the claim, Malami said “God knows that I did not purchase any house for him in Abuja. Not even a rented house was secured for my son in Abuja, because he has no plan to live in Abuja”.

The allegation of hiring private jets for the marriage was preposterous. It is common knowledge that the Attorney-General of the Federation and Minister of Justice had neither a father nor mother anywhere in Nigeria to be conveyed to Kano for the wedding. Who, then the Attorney-General is using the chartered flight to convey? Which jets are chartered? Who paid for the charter? Through which means was the money paid?

It is one of such libelous publications of which Sahara reporters is commonly known for targeted at selected few for unsubstantiated fabricated allegations while overlooking more serious reasonable allegations visibly open against its favoured sectional kingsmen.”