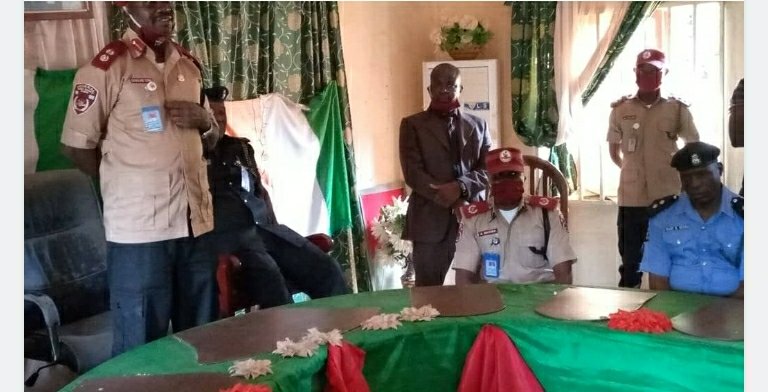 The Kebbi State Sector Commander of Federal Road Safety Corps(FRSC), Danasabe Shehu, has warned Officers not to use their uniforms to intimidate the general public in the course of their duty.

Speaking in Kamba, in Dandi Local Government, a border town in the state, during his familiarisation visit to Kamba Unit Command Sheik said “I want to implore you to see the FRSC uniform as as a tool for efficient service delivery to Nigerians rather than an instrument of intimidation”.

The commander who was received by the Unit Commander, Special Marshals, Heads of Sister Agencies, Chairmen and Officials of Kamba branch of Transport Unions including; NURTW, NARTO, ACCOMORAN, and Tricycle Riders Association also charged Officers and Men to be dedicated to their duties and shun all forms of corruption.

He warned that the Corps Marshal’s zero tolerance to bribery was still in force and anyone caught will be shown the way out.

Shehu made a call to the District head of Kamba, Alhaji Mamuda Z Fana ( Maigirima Sarkin Shikon Kamba) at his residence and expressed the appreciation of the Corps Marshal for his support to Kamba Unit Command from inception and solicited for more.

The Royal Father welcomed the Sector Commander stating that he has been enjoying a good working relationship with the Command.

He promised more support to FRSC while tasking the Command to tackle the menace of Speeding, Overloading and Driving Under Influence (DUI).