Op Ed: SALLAH VIDEOS OF OUR AUNTS AND OUR COURT OF PUBLIC OPINION

Everyone deserves the joy and fulfillment marriage brings and how we interpret the bliss that comes with that is relative. As a fingerling in matrimony, I have little personal experience about marriage but I have spent the last seven years of my professional life settling marital scores or at least failing to do so most of the time.

This therefore gives me a working knowledge or at least a translucent picture of the matter.

This week numerous video challenges surfaced on the Arewa social media spaces. They were as romantic as they were enigmatic. Married Arewa women competed to outslay their pairs by showing off how they livin la vida loca. They danced passionately and stepped vigorously to freeze the endocardium of their men. Many believe the show-offs were unbecoming of Arewa women and lashed at them profusely without equivocation. The fact remains family business remains private until they are made public and once this happens, our court of public opinion assumes an unfettered jurisdiction to try the matter suo moto.

Coming from the Arewa part of Nigeria, I am not oblivious of the fact that women are veiled and concealed, reasons being customary and religious. The practices of married Arewa women dancing to caress the central nervous system of their spouses in the public eye are as unprecedented as they are unorthodox to us. But before our final verdict, it would not be out of place to evaluate the precipitating pleadings already frontloaded to arrive at an ultimate ratio decidendi.

Many of us who grew up in the 80’s or at least the 90’s in northern Nigeria would attest to being nurtured by Indian movies. We loved the fight and romance. A striking epiphany about Indian movies then (and maybe in the present) is that no matter how strong, powerful or ruthless the star actor was, he ends up in a romance, singing along and dancing with a lady either in the garden, the skies or even in the deciduous forest of the cool temperate western margin. Even though they seemed like mere mirages, we extolled and fantasized about them, and our ladies being the more emotional creatures craved for more. I may be right if I say many Arewa women believed they have only seen what a romantic man is through the screens. It would be unfair for you ladies to judge us based on a movie. However, I would be negatively biased if I say as Arewa men we don’t also crave to be loved in the Indian way, as unrealistic as the movies are.

An incontrovertible assertion is that most of us in Arewa during our budding years only saw our parents exhibit a high sense of formality in their relationship at home. I may be right if I say, most of us at first disbelieved our Biology teachers when they first discussed reproduction. We once thought our parents never had anything intimate. We saw our parents as angelic creatures that brought us to earth devoid of any biological gymnastics. Whether this is the case or not, we are still products of a miracle. The relationship that characterizes fatherhood in an average Arewa family is anchored in fear. There is always love, laughter, and excitement when a father is away. But a sudden delirium emanates minutes before his return. Mothers at that time would have instructed kids to behave properly and reduce their noise since they had no ass whipping insurance or risk suffering like market thieves. The mother would cover up her body in anticipation of his return as if it was forbidden for him to see any part of her body. Most of us grew up seeing how unholy being romantic was and since the apple doesn’t fall far from the tree, It becomes a chain reaction that navigates as a merry go round.

Oya! Aunties, let us reason together. Aunties we saw the videos, they were epoch as you slayed while displaying such kinetic energy. Let’s clap for you, you were good to go. However, we noticed the faces of our Uncles as you danced and sang towards them like Karina Kapoor. Their faces weren’t the merriest. Some of our Uncles looked so disgruntled, some visibly shocked and angry while others the loudest of them all, indifferent. We are not also oblivious of the fact that one of them stood and reciprocated the gesture. But for most of them to show such apparent lack of appreciation meant there was more to seeing that meets the eye. It wasn’t actually a show of love, it was a show-off. Auntie, before your marriage and a few months into the marriage you called him Darling, Sugar, Baklava etc but after the first child Baban Garba. 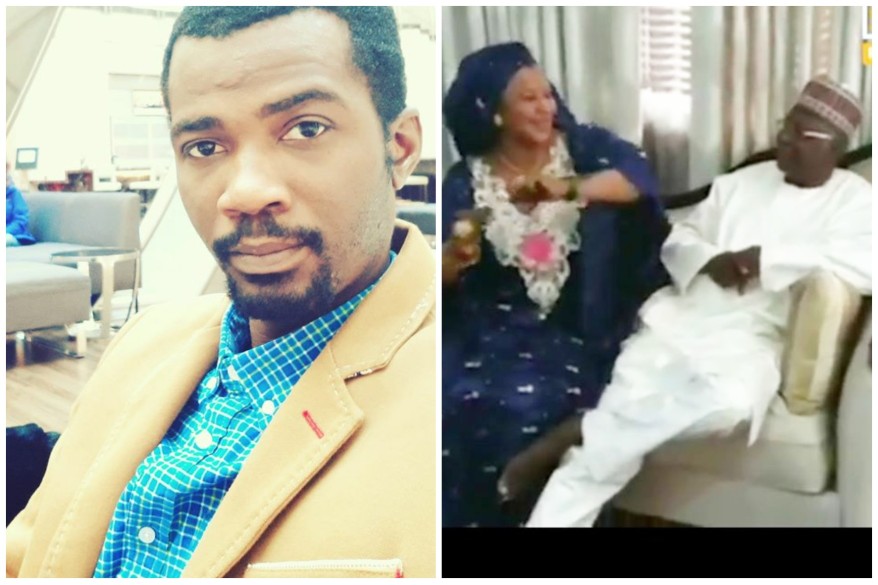 Haba! Auntie, you have been married to our Uncle for more than 10-20 years and all Uncle knows is your lack of compassion and blame. Out of the blue because of a contest you have done what he knows you were never capable of doing and of course doing it to please the world and not him. Perhaps in your decades of marriage, you have never gifted him a toothbrush. Truth be told, perhaps you have never sacrificed to buy a negligible item like salt without him doing so. Our uncles are just cows that get milked at will. The more you danced towards our Uncles, the more they see a liability coming towards their direction. As raw as this may be, it may not be far from the truth. But Aunties, you should know whether your laundry is clean or dirty, once you dry it out in public, people must talk. But truth be told, most of us who reacted negatively to our Aunties’ videos did so believing we were holier than the pope. Everyone is fallible.

Oya Uncles, come closer let us talk. Why the disinterested faces we saw in the videos? Uncle, it is you who dances fervently and sings melodiously for girls three times younger than your age at your numerous rendezvous. Why not appreciate our Auntie? It is the same you who also tells young girls four-times younger than you not to call you Sir, that your name is Yusuf. Why demand so much respect from Auntie? Remember, you saw Auntie decades ago, you strived relentless and fought voraciously to get her attention.

You showered her with all the kinds of attention and even wrote her many letters manifesting your universal declaration of love. Her expectation remains that that shower of affection goes to the grave and because of this you became the chosen one. Two weeks into your marriage you became a shadow of yourself demanding respect from all corners and suddenly Auntie was your housemaid. The only time she sees your humility and submission is that very time of the wee hour of the night. This can also change. We are not judging you Uncle, we know Auntie has her own flaws but when the chips are now, she may be the only one standing.

It doesn’t hurt to be romantic, we can all be. If we remember the story of the man, his son and the donkey, we would realize that no matter what you do, people must opinionize.