Kebbi State Governor, Senator Abubakar Bagudu, says all the Northern States, have been mandated to take steps, to return Almajiri Children to their states of origin.

This, he said, was part of the concerted efforts by the Northern States Govenors, Federal Government and other stakeholders are doing to further stem the tide of the raging global Coronavirus Disease Pandemic ( COVID-19).

Semator Bagudu who disclosed this in Birnin Kebbi, Tuesday while interacting with the State Task Force on Covid 19 at Kebbi Medical Center, Kalgo also said that, the resolutions were reached at the meeting of the Northern Governors Forum in Kaduna, Tuesday . 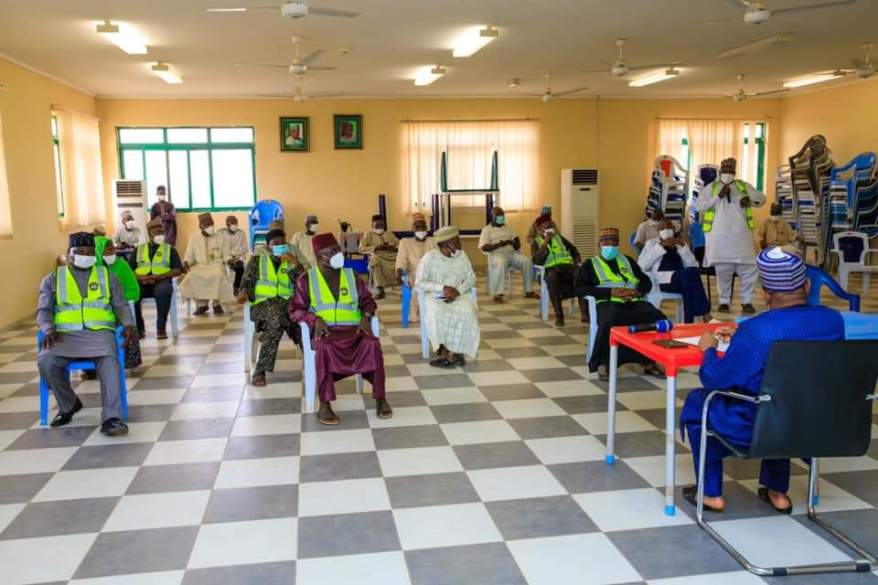 He explained that, some of the almijiri children from the state had since been returned to Kebbi from Kaduna State.

According,” some states have already started implementing this decision by taking back such almijiri children to their own states of origin.

” I do believe that, all the states in the region would soon commence the repatriation and this is for the common good of the states and Nigeria, in general.”

Governor Bagudu also expressed happiness that, the state has remained COVID-19 free and assured,” In Sha Allahu, it would remain.”

He however never to be complacent in the happy feat achieved by the state in it’s determined bid to curtail the menace of the pandemic .

Senator Bagudu averred that, efforts were on to collaborate with the management of the National Youths Service Corps scheme in the state to convert the orientation camp in Dakingari to an Isolation centre as directed by the federal government while promising that the state will do what is necessary to improve the camp to serve as befitting isolation center.

Similarly also, governor Bagudu said the Presidential Flood Committee had availed their camp, the Internally Displaced Camp at Kalgo for the state to use as an Isolation center or quarantine facility in case the need arises for it’s use.

“” This is in addition to the ones already designated by the Task Force on Covid 19 at Kalgo Medical Center as Isolation camp and fully functional Intensive Care Unit (ICU) for Covid -19 victims.

“” The Task Force has also identified and dedicated a ward at Federal Medical Center, Birnin Kebbi and Sir Yahaya Memorial Hospital also in Birnin Kebbi as additional facilities for Covid -19″”, he said.

Bagudu also told the Task Force members that the federal government in its efforts to ensure that testing is taking place in all the states of the federation, it has taken steps to convert the ‘Gene’ machines which are use for tuberculosis and upgrade them for testing of Corona virus .

According to him, the Kebbi State Government has four Gene machines at Zuru, Kamba, Yauri and Argungu in addition to the one at Federal Medical Center Birning Kebbi. He said the FGN was engaging the manufacturers to upgrade the machines.

He urged the Task Force members to take advantage of the Ramadan Fasting period to particularly engage religious leaders so that they can educate people on the necessary measures to take against Covid 19.

He said meeting with Islamic religious leaders have been on going to look into the possibility of sponsorship of Ramadan Tafsir (Sermon) on radio and television conducted by Ulama . This was in recognition of suspension of such Tafsir and Tarawi prayers in mosques ,nationwide this Ramadan arising from the advent of Corona Virus .

The governor before he made his remarks, had earlier allowed for deliberations .Each member of the Task Force on Covid 19 expressed his feelings and shared his experience on the measures taken by government, challenges, obstacles and the way forward.

The Commissioner for Health and the Chairman State Task Force on Covid -19, Jafar Muhammed (Clean) enumerated some of the activities of the Task Force since inception to include sensitization campaigns on Covid 19, designation of Isolation centers at Kebbi Medical Center,Kalgo and Sir Yahaya Memorial Hospital, Birnin Kebbi, meeting traditional leaders and religious leaders,leaders of trade Unions, Women groups and Youth groups on advocacy for personal hygiene,social distancing and environmental cleanliness.

Other measures according to the Commissioner included training Health Staff on safety measures to themselves and patients and appointment of surveillance Health Officers in all the 21 LGAs in the state.

The Task Force Chairman had also mentioned some of the challenges facing the committee to include coping with large number of people coming into the state and trying to get people get use to social distancing among others.

The meeting was held at Kebbi Medical Center Kalgo on 21st April,2020 attended by the State Deputy Governor, Alhaji Samaila Yombe Dabai, the Secretary to the State Government, Alhaji Babale Umar Yauri, members of the task force responsible for controlling Covid 19 pandemic
headed by the Commissioner for Health Jafar Muhammed (Clean), the labour union and cross section of members of the press.

The governor was later conducted round the facility by the team and CMD of the hospital, Dr Abubakar Koko.