Kebbi State Government, says the payment of March salary and pension to workers will not suffer inspite of the global economic downturn arising from the corona virus pandemic.

Governor Abubakar Atiku Bagudu gave this assurance at the Presidential Lodge Birnin Kebbi this Monday at a meeting of stakeholders to chart the best course of action for the future of the state.

Senator Abubakar Atiku Bagudu would however like the gathering to advance options on the uncertainty in the payment of salary in subsequent months if federation allocation fall below the salary bill of the state which currently stood at One Point Ninety-Five Billion Naira monthly. 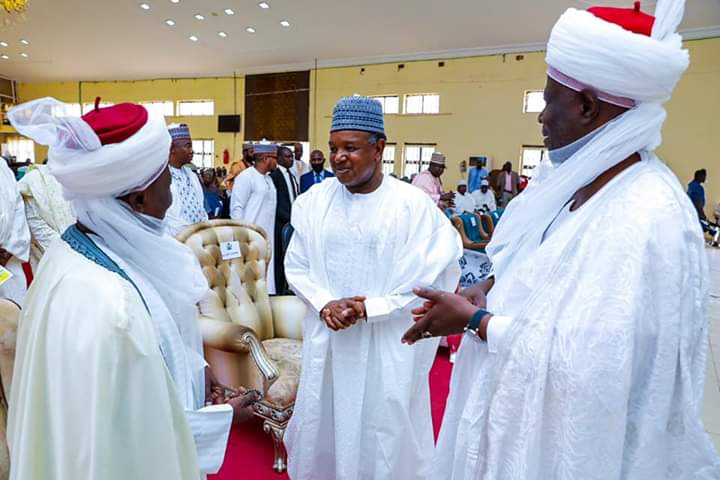 The Governor was optimistic that the government would settle all liabilities of serving and retired civil servants as he has promised.

Senator Abubakar Atiku Bagudu informed the forum that the Corona Virus pandemic has hit the economy of the world hard, including Nigeria which made it impossible to market her crude oil.

Furthermore, the prices of oil have continued to nosedive with unforeseen consequences on the 2020 budget of both the federal and state governments.

The governor announced that an advisory committee of experts and professionals would be constituted to offer suggestions on how Kebbi state could manage its affairs and off set its obligations to the people under the present paucity of resources globally and nationwide.

He made it clear that the situation has become worrisome because the state relied heavily on federation allocation without major source of internally generated revenue.

Governor Abubakar Atiku Bagudu expressed appreciation to the State House of Assembly for its support and identifying with the ideals of the executive arm in serving the people of Kebbi.

He extended similar commendation to traditional rulers for their understanding and championing the goals of the administration.

Senator Abubakar Atiku Bagudu advised the people of the state to bear in mind that the Covid-19 pandemic was a reality which made it obligatory to observe strict hygiene practices to prevent affliction and its spread to the state.

In an interview with Newsmen afterwards, Governor Abubakar Atiku Bagudu vowed that, the wellbeing of the people of the state remained paramount in the policy thrust of his administration.

The Secretary to the State Government Alhaji Babale Umar Yauri explained that the meeting was convened to discuss issues of economic downturn in the world with its effect on Nigeria and Kebbi state.

The stakeholders also examined the current health matters relating to Corona Virus pandemic and strategies to safeguard its spread to Kebbi state.

The Permanent Secretary Ministry of Budget and Economic Planning, Hajiya Aishatu Usman reviewed the finances of the state, saying that money accruing to Kebbi have been on the shortfall.

She added that the state was yet to receive its federation allocation for March as no disbursement has been made nationwide.

The Auditor-General of the State, Alhaji Faruq Makera made comparative analysis of Kebbi revenue earnings and commended Governor Atiku Bagudu of striving to meeting the financial obligation of the government and people of the state in spite of glaring economic challenges.

The Commissioner for Health, Honourable Ja’afaru Muhammad announced that there was no suspected case of Corona virus infection in Kebbi state, saying a multi-sectoral committee has been set up as part of proactive approach to prevent the spread of the disease to the state.

The Commissioner for Local Government and Chieftaincy Affairs, Alhaji Hassan Muhammad Shalla expressed fears about possible deficit in the statutory financial obligation of local government councils as a result of impending global economic crisis brought about by Covid-19 pandemic.

The Emir of Gwandu, Alhaji Muhammadu Iliyasu Bashar and the Emir of Argungu, Alhaji Sama’ila Muhammadu Mera advocated the reintroduction of personal tax (Haraji) and cattle tax (Jangali) in the state to facilitating societal development as was the practice in the past.

He said such schools should be temporarily closed similar to the closure of primary, secondary and tertiary institutions.

The Speaker, Kebbi State House of Assembly, Alhaji Sama’ila AbdulMumini Kamba, averred that the legislature remained proactive in upholding the interest and wellbeing of the people of the state and championing good governance.

Among stakeholders at the forum were, the deputy Speaker House of Assembly Muhammad Buhari Aliero, the Chief of Staff Government House, Suleiman Muhammad Argungu, the Secretary to the State Government Alh. Babale Umar Yauri, the Acting Head of Service Hajiya Fatima Sani Ango, Commissioners, Members of the House of Assembly Permanent Secretaries, Local Government Chairmen, Heads of Agencies and Parastatals, Directors, Emirs of Gwandu and Argungu, representative of Emir of Yauri Alhaji Mu’azu Galadiman Yauri as well as other traditional rulers and head of tertiary institutions.